Make a batter with flour, beer, beaten egg, water. Rest the batter for 30 minutes. Cut the fish in long fillets. Dip fish in the batter and fry it in hot oil. Peel and cut potatoes into strips. Fry the potatoes in hot oil over medium heat. Serve the fish seasoned with vinegar and salt with plenty of fries.

I want to go to Ibiza because there are a lot of partys and I want to visit Miami too. I love partys, all partys.

My favourite subjects at school are P.E. and Maths. I like Maths because are easy for me.

This painting is from Salvador Dalí.

He had a sister, Ana Maria, she was three years yonguer than him .

In this paintig  there is a horse, four elephants, a nacked man with a litlle cross in his  hand, a palace, two towers and a water fountain.

The  palace, the two towers and the water fountain are on the four elephants.

This person is San Antonio. 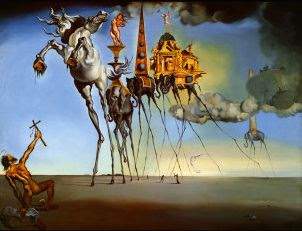 His wife is Cathy Guetta and they have got 3 children are Tim, Elvis and Angie.

He’s got long, brown, straight hair, he is tall and he’s got a big mouth.

His new song is  Without You feat Usher. He is tall and he is a good friend.

He is form spain, he was born in the hospital of Terrasa.

He likes football and tennis.