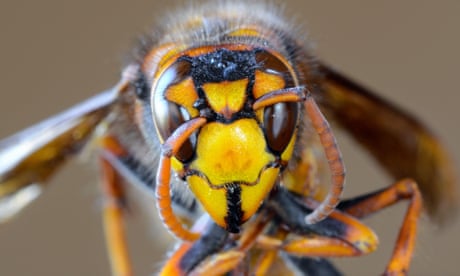 A buff-tailed bumble bee collects nectar from an apple tree. Swaths of American agriculture is propped up by honeybees. Photograph: DPA/Alamy

A lack of bees in agricultural areas is limiting the supply of some food crops, a new US-based study has found, suggesting that declines in the pollinators may have serious ramifications for global food security.

Species of wild bees, such as bumblebees, are suffering from a loss of flowering habitat, the use of toxic pesticides and, increasingly, the climate crisis. Managed honeybees, meanwhile, are tended to by beekeepers, but have still been assailed by disease, leading to concerns that the three-quarters of the world’s food crops dependent upon pollinators could falter due to a lack of bees.

The new research appears to confirm some of these fears.

Of seven studied crops grown in 13 states across America, five showed evidence that a lack of bees is hampering the amount of food that can be grown, including apples, blueberries and cherries. A total of 131 crop fields were surveyed for bee activity and crop abundance by a coalition of scientists from the US, Canada and Sweden.

“The crops that got more bees got significantly more crop production,” said Rachael Winfree, an ecologist and pollination expert at Rutgers University who was a senior author of the paper, published by the Royal Society. “I was surprised, I didn’t expect they would be limited to this extent.”

The researchers found that wild native bees contributed a surprisingly large portion of the pollination despite operating in intensively farmed areas largely denuded of the vegetation that supports them. Wild bees are often more effective pollinators than honeybees but research has shown several species are in sharp decline. The rusty patched bumblebee, for example, was the first bee to be placed on the US endangered species list in 2017 after suffering an 87% slump in the previous two decades.

Swaths of American agriculture is propped up by honeybees, frantically replicated and shifted around the country in hives in order to meet a growing need for crop pollination.

Almonds, one of the two crops not shown to be suffering from a lack of bees in the study, are mostly grown in California, where most of the beehives in the US are trucked to each year for a massive almond pollination event.

The US is at the forefront of divergent trends that are being replicated elsewhere in the world – as farming becomes more intensive to churn out greater volumes to feed a growing global population, tactics such as flattening wildflower meadows, spraying large amounts of insecticide and planting monocultural fields of single crops are damaging the bee populations crucial for crop pollination.

Honeybee colonies are weaker than they used to be and wild bees are declining, probably by a lot

According to the UN’s Food and Agriculture Organization, the amount of crop production dependent upon insect and other pollinators has increased 300% over the past 50 years. Pollination shortfalls could cause certain fruit and vegetables to become rarer and more expensive, triggering nutritional deficits in diets. Staple foods such as rice, wheat and corn won’t be affected, however, as they are pollinated via the wind.

“Honeybee colonies are weaker than they used to be and wild bees are declining, probably by a lot,” said Winfree. “The agriculture is getting more intensive and there are fewer bees, so at some point the pollination will become limited. Even if honeybees were healthy, it’s risky to rely so much on a single bee species. It’s predictable that parasites will target the one species we have in these monocultural crop fields.”

The paper recommends that farmers gain a better understanding of the optimal amount of pollination needed to boost crop yields, as well as review whether the level of pesticide and fertilizer put on to fields is appropriate.

“The trends we are seeing now are setting us up for food security problems,” Winfree said. “We aren’t yet in a complete crisis now but the trends aren’t going in the right direction. Our study shows this isn’t a problem for 10 or 20 years from now – it’s happening right now.”