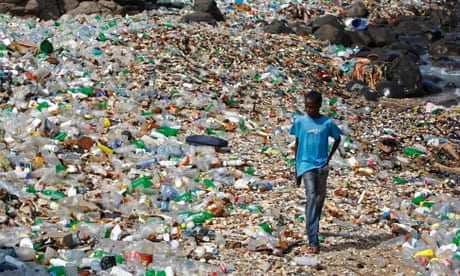 A new network of drinking fountains and bottle-refill points is set to be rolled out across London this year as part of a plan to reduce the amount of waste created by single-use plastic, the Guardian has learned.

Twenty new drinking fountains will be installed across London in a pilot scheme starting this summer, while a bottle-refill initiative, in which businesses make tap water available to the public, will be set up across five areas of the capital over February and March. If successful, it will be rolled out to the rest of the city in the summer. Plastic cups, bottles and cutlery will also no longer be available at City Hall under the plans.

The plans are part of a proposed three-year, £750,000 initiative from the mayor of London, Sadiq Khan, to tackle plastic waste in the capital, and will be put before the London Assembly’s budget committee on Thursday.

A million bottles a minute: world’s plastic binge ‘as dangerous as climate change’

“We shouldn’t be using single-use plastics, the impact on the environment is so immense,” the deputy mayor for environment, Shirley Rodrigues, told the Guardian, adding that programmes like the BBC’s Blue Planet had brought home to scale of the problem for many. “We just need to get on now and stop their use in London.”

An investigation by the Guardian published last month revealed that there are stark disparities in the provision of drinking fountains across London’s boroughs: while Sutton and Barnet had none, Lambeth and Tower Hamlets had 25 and 13 working fountains respectively. Across England’s 36 metropolitan boroughs, covering many of the country’s other major cities, only eight fountains were working, with none in Manchester, Liverpool or Birmingham.

The latest plans appear to be a move to follow through on recent proposals from Khan to reduce packaging waste, improve access to tap water and make sure no biodegradable or recyclable waste is sent to landfill by 2026.

Rodrigues said the locations of the 20 new drinking fountains had not yet been confirmed but that TfL’s tube stations and busy shopping thoroughfares such as Oxford Street are among possible sites. Further drinking fountains are being considered, she added.

The areas to be covered by the pilot refill scheme have not yet been announced but businesses offering free tap water to the public will display signs in their windows, while bottle-refill points will also be featured in an app. 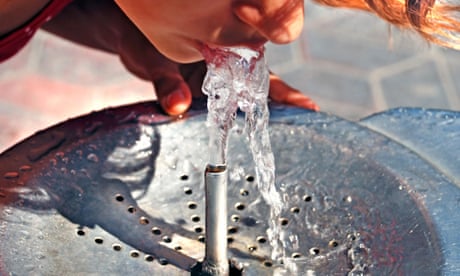 “We are going to be looking at partnerships with organisations like business improvement districts and boroughs and others to understand where we can install more water fountains,” Rodrigues said.

Among those working with the mayor on the new plans is the #OneLess campaign, led by the Zoological Society of London, which is supplying the fountains and will analyse whether the initiatives reduce the levels of plastic ending up in the environment.

The Guardian can also reveal that Network Rail has made a U-turn on its stance towards drinking fountains.

A statement issued in December said: “Water fountains are not a facility we currently have in stations and there are currently no plans to do so,” but the company has revised its position. “We are supportive of having water fountains in our managed stations and will be looking to see how we can take this forward,” a spokesperson told the Guardian.

Last August, London’s Borough Market announced it was installing drinking fountains and aiming to banish single-use plastic. Last week the City of London announced its own plan to boost the number of drinking fountains within the Square Mile and encourage businesses to make tap water available for bottle refills.

Paul O’Connell, a trustee of the Drinking Fountain Association set up in 1859, welcomed Khan’s plans.

“In the past we have had vague promises and announcements, so to hear specifics around numbers – and, most importantly, dates – is really good. Obviously summer is when demand for water goes up, so having [fountains] in time for this summer will help,” he said, adding that other cities including Liverpool and Manchester should follow suit.

… we have a small favour to ask. More people are reading the Guardian than ever but advertising revenues across the media are falling fast. And unlike many news organisations, we haven’t put up a paywall – we want to keep our journalism as open as we can. So you can see why we need to ask for your help. The Guardian’s independent, investigative journalism takes a lot of time, money and hard work to produce. But we do it because we believe our perspective matters – because it might well be your perspective, too.

I appreciate there not being a paywall: it is more democratic for the media to be available for all and not a commodity to be purchased by a few. I’m happy to make a contribution so others with less means still have access to information.Thomasine F-R.

If everyone who reads our reporting, who likes it, helps fund it, our future would be much more secure. For as little as £1, you can support the Guardian – and it only takes a minute. Thank you.