Another Defeat for Science: “Metallic Hydrogen” 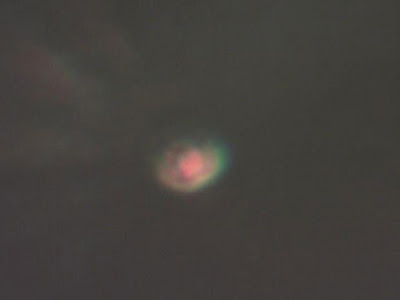 This blob is supposed to be “metallic hydrogen” according to the claim of a group of Harvard scientists. Maybe. For sure, it is another disaster for the reputation of science and of scientists.

Another day, another disaster for Science. A group of researchers from Harvard claimed of having obtained for the first time “metallic hydrogen” in their laboratory. That gave rise to a series of improbable claims about the cornucopia of abundance that humankind could obtain from the discovery. Especially lyrical was “The Independent”, in an article that was soon retracted and replaced with a more sober one their page, where they now say it was all a mistake. But the first article contained such gems as:

Now, in a stunning act of modern-day alchemy, scientists at Harvard University have finally succeeded in creating a tiny amount of what is the rarest, and possibly most valuable, material on the planet,

metallic hydrogen could theoretically revolutionise technology, enabling the creation of super-fast computers, high-speed levitating trains and ultra-efficient vehicles and dramatically improving almost anything involving electricity. And it could also allow humanity to explore outer space as never before.

And more like this, and thank God they didn’t mention flying cars but they got close.

Now, let’s examine this story. First of all, “metallic hydrogen” is a legitimate target of investigation. It was theoretically predicted already about a century ago and believed to exist in the core of giant planets. From here onward, however, the whole story is just a mix of fantasy and bad science.

The claim comes from a test in which the researchers placed a sample of hydrogen inside a diamond anvil and compressed it at very high pressures. At some point, they saw something shiny appearing and they concluded that it was “metallic hydrogen.” Immediately afterward, they proceeded to publish their story with all the associated outlandish claims of spaceships, alchemy, ultra-efficient vehicles, etc.

Now, when you start a career as a scientist, you are told that

1) Your experiments should be repeatable.

2) There be should be always proof – say, a blank test – that what you claim is not an artifact of your experimental setup.

3) You should never claim anything for which you have no evidence.

Consider this as a checklist and you’ll see that the Harvard researchers should mark all three items as “failed.” (1) Unbelievable but true: they didn’t repeat their experiment, they didn’t make a blank experiment, and they engaged in wild fantasies on what their result could mean or, at least, they didn’t object on such fantasies being reported over the press.

Note that it is perfectly possible that the blob in the anvil could turn out to be metallic hydrogen, after all, but there is strictly zero proof that it could turn out to be stable at or near room temperature and hence useful for the multiple claimed miracles. To say nothing of the fact that a diamond anvil processes micrograms and it would be interesting to calculate how many of these anvils would be needed to produce the tons of fuel needed to power a spaceship (hint: trillions).

More evidence, if it was ever needed, of the general decline of science, underfunded, poorly organized, pushed and pulled in all directions at the same time by politicians, businesses, journalists, the public, and more – a disaster. And the results are what you would expect: the general defeat of science that we are witnessing nowadays.

Can this trend be reversed? Hard to say but, at least, we should do something to avoid that the overinflated ego of some scientists continues to lead science into this kind of disasters.

(1) Incidentally, this is exactly the same series of failures that we can attribute to Stanley Pons and Martin Fleischmann when they claimed to have discovered “cold fusion” in 1989. An even worse defeat for science, whose consequences are still felt.