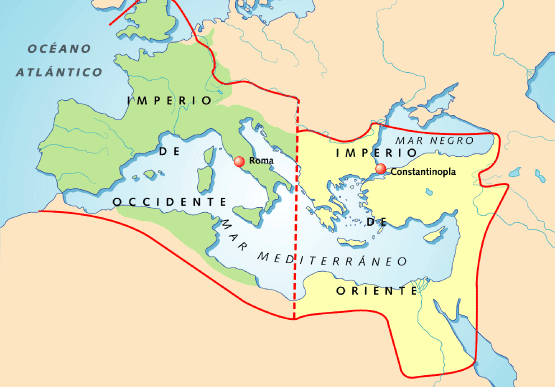 The collapse of the Western Roman Empire: was it caused by climate change? 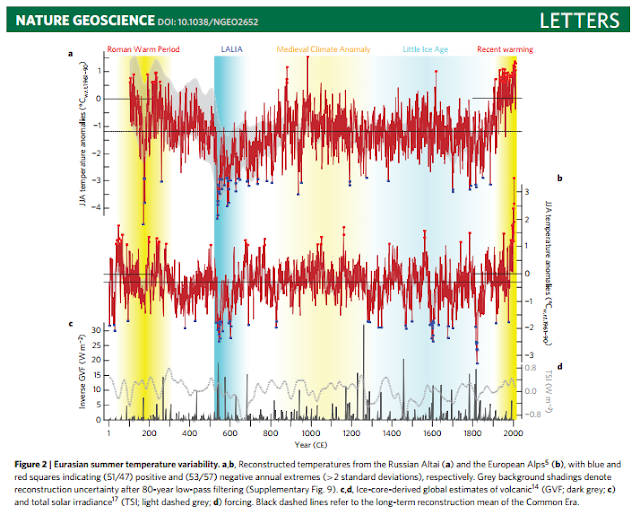 Image from the recent paper by Buentgen et al., published on “Nature Geoscience” on February 8, 2016. The red curves are temperature changes reconstructed from tree rings, respectively, in the Russian Altai (upper curve) and the European Alps (lower curve). Note the remarkable dip in temperatures that took place starting with the 6th century AD. But these data clearly show that climate change was NOT the cause of the collapse of the Western Roman Empire.

The relationship of climate and civilization collapse is a much debated subject. From the recent collapse of the Syrian state to the much older one of the Bronze Age civilization, climate changes have been seen as the culprit of various disasters befalling on human societies. On the other side, instead, the “systemic” view of the evolution of complex societies sees collapse as the natural result of the declining returns that a society obtains from the resources it exploits. It is the concept termed “diminishing returns of complexity” by James Tainter.

On this point, we may say that there may well exist several causes for societal collap. Either climate change or resource depletion may sufficiently weaken the control structures of any civilization to cause it to fold over and disappear. In the case of the Western Roman Empire, however, the data published by Buentgen et al. completely vindicate Tainter’s interpretation of the collapse of the Roman Empire: it was a systemic collapse, it was NOT caused by climate change.

So, we can see that there was a cooling episode that probably affected the whole of Eurasia and that started with the beginning of the 6th century AD.  This period is called LALIA (Late Antiquity Little Ice Age) and it seems to have been stronger than the better known LIA (Little Ice Age) that took place during the 18th and 19th centuries. Overall, temperatures went down by a couple of degrees in comparison to the time that we call the “Roman Warm Period.”

A truly brutal cooling, yes, and it surely had effects on human life, as discussed at length in the paper by Buentgen et al. But it had nothing to do with the fall of the Western Roman Empire. The Empire started its decline in the 3rd century and its final disintegration phase with the beginning of the 5th century; when it ceased to be able to garrison the fortifications at the borders. Then, Rome was sacked one first time in 410 AD; and finally destroyed by the Vandals in 455 AD. That was the true end of the Western Empire, even though for some decades there were still individuals who claimed the title of Emperors. But all that took place in a period of relatively stable climate, at least from what we can say about the available data. So, the collapse was systemic, related to factors other than climate and, in my opinion, mainly related to the collapse of the Roman financial system, in turn caused by mineral depletion.

But could it be that, after all, there is a correlation between the Roman collapse and climate change? Just it would be the reverse of what it had been sometimes proposed: could the Roman collapse have caused the LALIA cooling (or, at least, contributed to it)? The idea is not farfetched: the population collapse that took place with the fall of the Empire could have led to a considerable level of reforestation of Western Europe, and that would have absorbed CO2 from the atmosphere. It is an idea already expressed some time ago by William Ruddiman. It seems to be out of fashion, nowadays, but I think that it should be explored more.

In the end, this story can teach us a lot: first of all, how fragile climate is. In the interpretation by Buentgen et al., just three volcanic eruptions – relatively large ones, but not catastrophic – were sufficient to cause a two-degree cooling extending all over Eurasia. Think of what could be the effect if something similar were to happen in our times! Then, it shows also how the situation, today, has completely changed. Temperatures have taken a completely different trend with the start of large scale emissions of greenhouse gases in the atmosphere. Incidentally, these data also completely vindicate the “Hockey Stick” studies by Michael Mann and others. Global warming is real, the earth’s climate is fragile, and we are in big troubles.