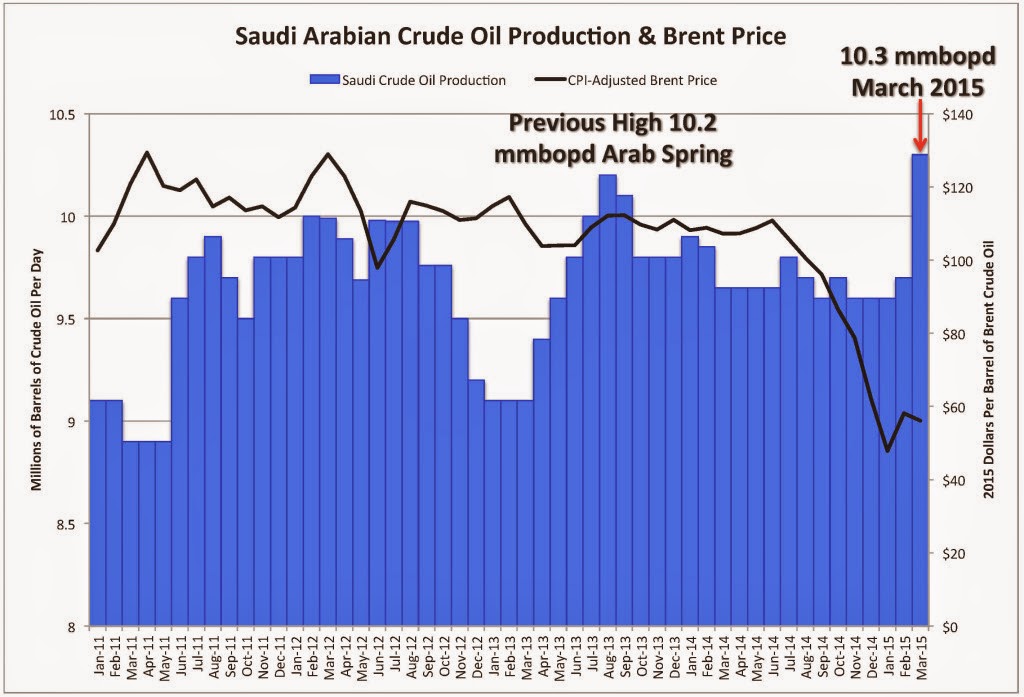 Saudi Arabia just increased oil production to a record level, never reached in previous history. They are doing that in a moment of record low oil prices. What do they have in mind? (Image from Arthur Berman)

When the collapse of the oil prices started, in the summer of 2014, everyone noticed that Saudi Arabia was not playing their traditional role of “swing producers”, that is varying their production in such a way to maintain reasonably constant prices. Facing a slump in demand, they should have reduced production; but they didn’t, at least not enough.

Initially, I thought the Saudis were simply taken by surprise and they were slow to react. But now, with the recent increase in Saudi production, it is clear that they have something in mind. Maybe they haven’t engineered the market collapse, but in some way they are riding it.

Though this be madness, yet there is method in ‘t. But what method could there be in raising production just when prices are lowest? Every single textbook in economics will tell you that the market should adapt to changes in demand and offer in exactly the opposite way: facing a reduced demand, production should go down, too.

Of course, as we all know, what you read in textbooks of economics has little to do with the real world. And, in the real world, there is a well known market strategy that consists in bankrupting your competitors by selling below cost. The idea is to create a monopoly and recoup later what the winner of the struggle has lost at the beginning. It is, of course, illegal, but the very fact that there are laws against it, means that it is done.

However, there is a little problem in applying this strategy to the oil market. It has to do with the fact that oil is a finite resource. So, if producers manage to obtain a monopoly, that means they will run out of the resource before the others. Imagine you are an art dealer: would you sell your Picassos at low cost in order to undercut the other art merchants and gain a monopoly? Of course not, what you would obtain is simply to run out fast of your precious Picasso paintings and then leave the market fully open to the others.

So, what are the Saudis doing, exactly? Art Berman suggests that they are fighting against the banks that created the tight oil bubble possible. After the elimination of the bubble, the market might return to relatively high oil prices and maximize the revenues for Saudi Aramco.

Berman’s interpretation is surely possible, but, as in all these cases, we are looking at governments as if they were “black boxes”, trying to understand the inner mechanisms that make them move. This is very risky: just as we see inclouds faces that aren’t there, we may see in a government’s action an intelligence that is not there. Are the Saudis really planning for a long term profit? Or are they simply misjudging the extent of their resources?

After all, we have several examples of non-renewable resources having been managed as if they were infinite. Just consider how the North Sea oil resources were extracted at the highest possible rate when the oil market was experiencing historically low prices. That left producers with declining oil field when market prices started increasing. It was not a very smart strategy, to say the least.

In the case of the North sea, there was no long term planning; it was just that the long term depletion problem was not understood. So, are the Saudis blind to the very concept of “depletion”?(*) That’s impossible to say at present. The only certain fact is that age of cheap oil is gone; even though some wild oscillations may make us believe that the good times have returned – but just for a while.

(*) About being unable to perceive that a mineral resource is running out, an especially tragic case is that of Yemen. For a few years, I have been following the “Yemen Times” and. in all this time, I never could read any statement that indicated that the problem of oil depletion in Yemen was understood. Whenever the decline in production was mentioned, it was attributed to terrorism, civil unrest, and other temporary problems. From what I could read, it seems to me that the Yemen society was (and still is) completely and totally blind to the fact that they have been gradually running out of oil and that oil depletion is the root cause of all the troubles that they have experienced, and that they are experiencing right now. (graph from “our finite world“)