A family of passionate recyclers from Longhope in the Forest of Dean, have raised hundreds of pounds from recycling used crisp packets. 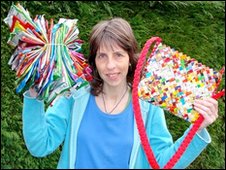 Richard and Rachelle Strauss, and daughter Verona, launched a scheme to dispose of empty wrappers environmentally earlier in the year.

They set up a recycling point in their local Tesco store to accept wrappers, which are normally sent to landfill.

After three months they collected some 12,000 crisp packets, weighing 21kgs.

The crisp packets were then sent to the Philippines, where they were sanitised and woven into handbags and pencil cases.

The new products, which are sold across the Philippines and the UK, were then sold for £2,800.

“This is a fantastic result which will make a difference to the lives of families in the Philippines,” said Rachelle.

“Once these crisp bags are made into products, the profits will keep 12 children out of poverty for a year and enable them to get an education.”

Richard added: “We would love to see other stores setting up collection points for recycling crisp packets.

“If we can divert empty crisp packets to the Philippines we can turn the lives around of children.

Last year, the Strauss family sent just one dustbin full of waste to landfill – everything else was reused, composted or recycled.

Their progress can be followed on their My Zero Waste website.

Read the article and post a comment by answering the questions below. Use the dictionary to find the meaning of those words you don’t understant and add them to your personal glossary.

In this site, you can learn or just refresh how to recycle at home, why recycling is important, how materials are recycled and where you can recycle.

24th October 2010: 3R Reduce, Reuse and Recycle.
Read the information from the site and create a leaflet bearing in mind it is a leaflet to inform the population. You can use Publisher.

6th November 2010: LOUIS PASTEUR. Reading Comprehension:
1. What do these words mean? disease, undertake, souring wine, silkworms, tiny, smallpox, vaccination, treatment
2. When was Pasteur born?
3. Where was he from?
4. Why was he famous?
5. He explained the causes of some diseases. Which ones?

Here we'll publish all the test you're having this term.

Any event, grand, exhibition related to Science will be published here.